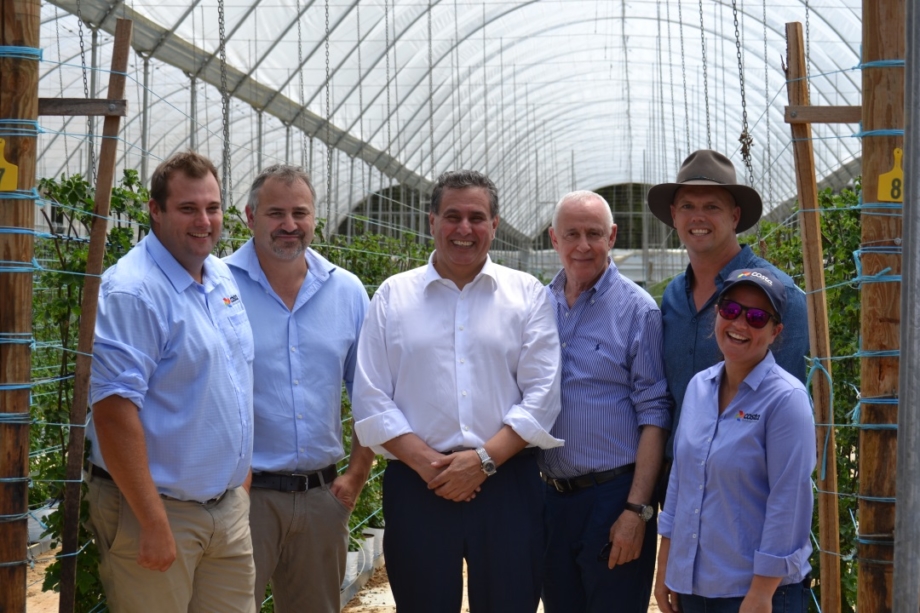 A delegation led by the Moroccan Minister of Agriculture toured the Costa Berry farm at Corindi on February 9 as part of a two-week visit to Australia that included New South Wales, South Australia, Victoria, Queensland and Canberra.

Mr Aziz Akhannouch, Minister of Agriculture, Fisheries, Rural Development, Waters and Forests, was accompanied by members of the chambers of agriculture and agricultural interprofessions, industry officials and agricultural company representatives.

The Minister said the visit was an opportunity to learn about the Australian experience in areas of training, research and biosecurity, and to see large producers such as Costa in operation.

He said there were opportunities for both countries to promote cooperation.

“Morocco is a gateway to the European and African markets for Australia,” Mr Akhannouch said.

Austrade Director in Morocco Mr Oussama Alaoui, who organised the mission program, said it was the second visit by the Minister to Australia and was aimed at developing new research and training collaborations, developing capabilities in areas such as biosecurity as well as to address opportunities for increased cooperation in trade and investment.

He said Costa, which had invested significantly in Morocco, provided a model for other Australian producers looking to gain access to the European markets.

“Costa enjoys a very good reputation in the Moroccan market and employs a good number of people. It also exports Moroccan agricultural products to the European Union,” Mr Alaoui said.

“This is a very important visit in terms of the status of the Minister in Morocco and as a leader of a political party. Australia just opened an embassy in Morocco in 2017 and this comes as a strong gesture from Morocco that they appreciate Australia is committed to being engaged.”

Costa Berry International General Manager, Peter McPherson, currently in Morocco for the opening said: “This is a further major investment by the Costa group in Morocco through its majority owned companies African Blue and Sweet Berry and will be the largest berry pack house servicing the EU market and will further enhance the overall quality reputation of the world leading Australian bred Costa genetics to its customer base.”