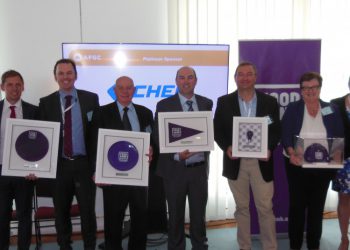 This week the General Manager of Costa Farms and Logistics, Mr Shanon Williams was in Parliament House Canberra to accept Food bank’s ‘Distinguished Service in Fighting Hunger’ Award on behalf of the Australian fruit and vegetable industry.

The Award acknowledges the fresh produce industry for doubling donations of fresh fruits and vegetables to Foodbank in the last five years.

“It was a great privilege to accept the Award on behalf of the fruit and vegetable industry, especially given that Costa recently marked a milestone of donating 2 million kilograms of produce to Foodbank.  This equates to over 16 million serves of nutritious fresh fruit and vegetables to people who might otherwise have gone without”, said Mr Williams.

In 2011, Costa was one of the first fresh produce companies to commit to assisting Foodbank on a national level and since then has become one of the food relief organisation’s most valuable partners.

As a result of the support from Australian fresh food and grocery companies such as Costa, Foodbank is able to deliver 166,000 meals per day to 2,400 charities and 1,500 schools for distribution to people in crisis. In 2015, Foodbank distributed 60 million kilograms of food and groceries across Australia, with 35% of this going directly to rural and regional areas.