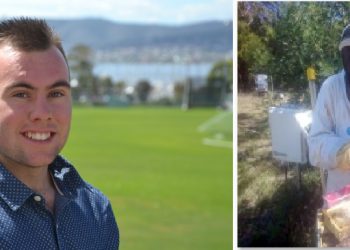 Growing up in Ulverstone and working during school holidays on his uncle’s crop and livestock farm, Dylan Bellchambers has agriculture in his blood.

Dylan is the 2018 recipient of the Costa North-West Scholarship in Agricultural Science, worth $10,000 a year for four years for a student studying agricultural science at the University of Tasmania.

Dylan, who will start a Bachelor of Applied Science (Agriculture and Business) in Hobart in the coming week, said it was fantastic to receive the scholarship.

“It’s not something I was expecting. I am the first in my family to go to university and they are very proud, but before the scholarship my Mum was particularly worried about how I was going to pay for the upfront costs at University. The scholarship will make a real difference,” Dylan said.

“I have worked on my uncle’s farm since I was about eight-years-old and I love the outdoors. I also have particular interests in berry and vineyard operations as I haven’t had direct experience in those areas.”

Dylan, who went to Ulverstone High School and Don College, said he was keen to raise the profile of agriculture, particularly in secondary and pre-tertiary education.

“Agriculture is growing in Tasmania and I think there could be more of a focus on science-based agricultural subjects, particularly in years 11 and 12,” he said.

The 2018 recipient, Sally Stone-Schack, from Sandy Bay, said she had a passion for working with animals and on the land.

She has completed three years of her Bachelor of Agriculture Science at the University of Tasmania and will complete her Honours year, with a research project focusing on bee behaviour.

“I grew up in a dairy region, on a hobby farm with a few sheep, protea patch and some mountain pepper, in South Gippsland in Victoria which is quite rural. Studying at the University of Tasmania really appealed to me because of the lifestyle,” Sally said.

“I like how we can use our environment to work with agriculture.  I found the entomology units quite fascinating and the role of pollination. I was curious to learn more about it.”

Her research project is specifically looking at the impacts of Thymol treatment on the foraging behaviour of bees.  Thymol is a treatment for varroa mites (Varroa destructor), which are a significant threat to bees around the world.  While Australia is one of the few countries in the world to remain free of varroa mite, it is estimated that the healthy bee population be could be reduced by 90-100 per cent if it became established.

“We need to find out if we have to use this treatment, that it doesn’t harm the bees’ behaviour.  I am sure the future findings will be applicable in the berry industry,” Sally said.

“We are thrilled to provide this support for ongoing education in the agricultural field, which is such an important and growing industry for Tasmania. We wish them every success in their studies,” Mr Beckwith said.

Rebecca Cuthill, from the University of Tasmania Advancement Office, welcomed the support from Costa.

“The University of Tasmania is incredibly thankful for the continuing Scholarship support provided by Costa, support that will positively shape and change the lives of both Dylan and Sally,” Ms Cuthill said.